Muslims are victims of radical Islamic terrorism too. As a matter of fact most victims of this terror are Muslims. Many more Muslims worldwide die from their bombs than Europeans or Americans. And, by the way, many of the American and Europeans that die in attacks are Muslims too.

In 2011 the National Counterterrorism Center stated that 82 to 97% of all victims of terrorism were Muslims. The reason the figure is uncertain is that we dont know for sure the exact religious affiliation of every victim.  But we know where the terrorattacks occur and that is revealing. 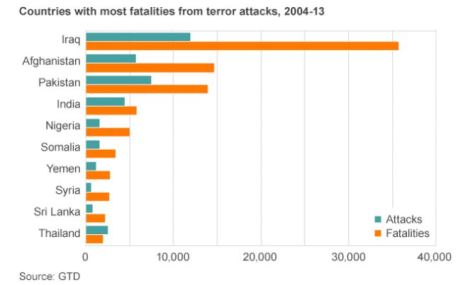 The German magazine Der Spiegel had an interesting article some years ago where they showed that 80% of the victims of attacks by Al-Qaeda 2004-2008 were muslims.

The same thing with ISIS. If you look at the operations by ISIS in Iraq 2014 you find that thousand of people were killed, most of them muslims, sunni as well as shia.

”In the first eight months of 2014 Isis was the “primary actor” responsible for the deaths of 9,347 civilians in Iraq.”

Of 167,221 terrorism-related fatalities reported from 2001 to 2015, almost all — 163,532 or 98 percent — occurred outside the United States and Western Europe, according to the University of Maryland’s Global Terrorism Database. The U.S. government-funded GTD is the world’s largest public database on terrorist attacks…

GTD data on 25 Muslim-majority countries from Iraq to Malaysia reveal that these countries account for 75 percent of all fatalities from terrorist attacks from that period. The United States and Western Europe, with a combined 3,689 fatalities — including 2,977 from the attacks of September 11, 2001 — account for just 2.2 percent of terrorism-related deaths during the period. 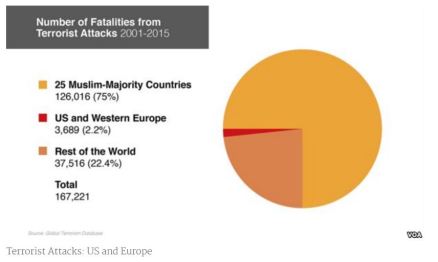 So the myth that all muslims are terrorists and like terror is a racist myth. Muslims are victims of radical islamic terror too and have every reason to be afraid of extremism.